GameBall  is the world’s first trackball mouse developed specifically for the computer gamer. It's unique design, gaming specific features and high-end components distinguish it from all other trackballs on the market today.

Not just for gaming This Trackball is the first that I have found that comes close to being as good if not better than my Trackball explore which is about 21 years old. I would highly recommend this Gaming trackball.

I just got into trackballs a few months ago. I started off with the Elecom Deft Pro, regarded by many reviewers to be an "excellent" trackball. My GameBall arrived today, and it's 100% clear I didn't even know what "good" was yet. I'm astonished by the difference in smoothness between it and the Elecom. I was one of the ones that replaced the bearings in my Elecom trackball and was very happy with the improvement, but the GameBall is unbelievably smooth right out of the box. Giving each a spin, the GameBall easily keeps moving 5-10x longer than the Elecom (even with a bearing upgrade in its favor), and there is quite literally no perceivable static friction ("stiction") when I go to start moving the trackball. It just... goes.

The contours of the trackball's body remind me of a high-performance sports car, and the quality in the GameBall's materials, fitment, and finish matches accordingly. You could put a Ferrari decal on this thing and it wouldn't look at all out of place. The "whale tail" thin end of the palm rest rises at the sides just ever so slightly so that your hand rests comfortably in a shallow pocket, instead of lying on the desk as it does with the Deft Pro and several other trackballs. The satin finish on the palm rest is smooth as can be. The clickable buttons on the GameBall feel premium, have good travel (some have complained they push too far, but for me they feel just right), and don't click unevenly when pressed off-centre; you can push them from any edge and they still actuate predictably. The touch-based scrolling took a little getting used to, but that was more just a warming-up period on my part than any actual design problems.

Gaming-wise, it'll take me some time to acclimatize to the new form factor over my previous trackball, but the difference in the polling rate from 125 Hz up to the 1000 Hz of the GameBall was immediately apparent. This thing is snappy as can be, and I could only get the sensor to "spin out" (tracking incorrectly due to the sensor failing to keep up with the surface) by swiping the ball hard enough to spin my virtual character like a top; no combination of ordinary gameplay movements or twitch-aiming could make it lose its place, unless you're the type to regularly pull off split-second 7,200-degree no-scope shots.

Some previous reviewers on other sites/videos said the rubber feet don't have enough grip to stay in place, but mine is adhering to my oak desk like it was glued down. Maybe glass desks could give it some issues, but it's anchored firmly in place for me.

10/10 on build quality, trackball movement, button feel, and overall design. This is an insanely good product. 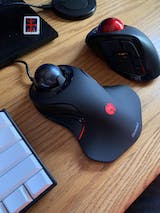 I have been playing around with the GameBall for a bit now. The build quality of the device is excellent. My only real complaint is the scrolling. The digital scroll works really well, but I personally prefer a physical scroll wheel.

K
Kamen
The finest input peripheral device I have purchased

GameBall is currently the only trackball on the planet that satisfies my requirements, and I just don't want to use any other device ever at this point. My Logitech Trackman Marble was showing its age, and I am more of a lefty, hence I was looking for a symmetrical / ambidextrous trackball similar to Trackman Marble or Orbit, pointer-finger- (and middle-finger-) controlled (that s quicker and more precise for me than thumb-controlled ones), but more functional and of premium quality. I was so confident GameBall is my device that I purchased two, and it was a great decision. It clicked with me from day one.
The dedication of the design team to create a carefully thought out and unique product, the attention to detail are obvious. As a computer engineer/IT person, occasional gamer, and audio/music production hobbyist, I appreciate the decision to program everything in the firmware. It will be awesome if/when the team decides to open the source.
The scroll is kind of revolutionary for such a device — not just because it is a capacitive/touch scroll, but also because it is both vertical and horizontal. Works great for me, it is consistent and sensitive throughout the entire range. A brilliant design decision that frees us from all the downsides of mechanical scrolls and that makes navigating audio and video editors a piece of cake. The area around the ball is well-designed — it is not easy to scroll by accident while moving the ball, or vice versa. I don't even need the filter on, but implementing it is a good idea.
I also noticed GameBall is equipped with some of the finest bearings and balls, if not the finest — the ball rotates very smoothly, almost as though it is on oily liquid. Trackman Marble is among the smoothest trackballs, but GameBall is even smoother.

Overall, I am impressed with the product and I think it deserves more attention and popularity. I believe it will come with time. Hopefully, it will be produced for many years to come. And if ever comes a time to stop its production, I hope we'll be informed so that we can secure a number of GameBalls in advance.

Thanks to the whole team for their work, and greetings to Eric for his prompt customer support.